Ergo on the Xbox

Imagine that we created an Ergo Platform app for Xbox that includes a miner/screen saver, some games, some kind of dropship merch shop, and some kind of branding and development around a stable coin.

I realize that doesn’t sound easy, but imagine for a moment that it is already done. Then we would have an app in a very popular ecosystem. It would provide gamers with a way to turn a small amount of electricity into a small amount of in-game currency. They could save it up to buy a new Xbox controller, or gift card. Or they could try to increase their holdings by competing with other players.

What do we get of this?

What does Microsoft get out of this?

How would we go about making this happen?

Am I off my rocker? Or is this conceivable?

It’s possible sure, some discussions here in relation to an open-source ETH miner. People in that thread seem fairly keen.

Unfortunately, discovered that this miner cant work full capcatiy without Xbox ID release since UWP games only get 1/4 of GPU. Miner should work very well AS IS with Xbox ID or any “Full Release” that can fully use GPU

And some discussions from the Issue tab

It’s pointless to abuse the issues system to beg for an update. There won’t be any real improvement until someone who intimately understands DirectX shaders decides to spend an unreasonable amount of effort writing one for meager crypto gains. Not going to happen. Buy a miner if you want to mine.

The architecture is so different that it’s hard to tell what its mining potential could be, it should be closest to an AMD GPU with the same speed of VRAM, so one of the RDNA 2 cards should be close. Theoretically, slightly above a 2080 Ti. Maybe gross $2.50 a day. Free vending machine snacks I suppose.

Thanks much for this clue, sir.

I found this part enlightening: 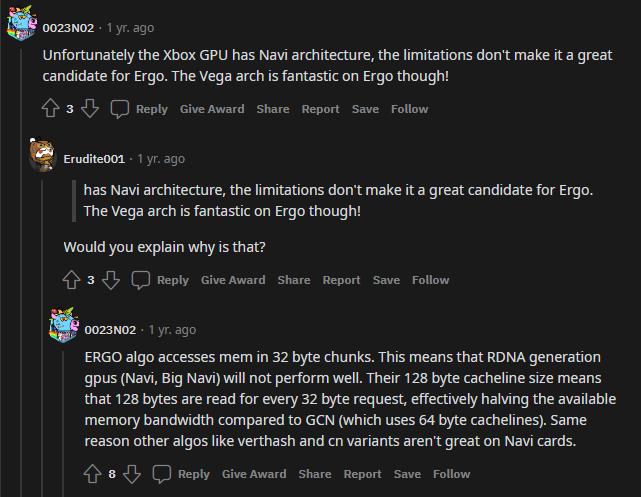 There could be challenges to making it particularly profitable, per watt. But it’s not like we’re talking about water heaters here… we’re talking a few hundred watts at most, in their dorm room. Hook it up to a pedal generator, or a rowing machine and let the kid sweat it out! If someone is concerned about the environment, then they should shed more tears for the production and delivery costs of the Xbox. Let’s not forget that electricity is magic, and remains the best value proposition throughout the developed world. And we’re not talking about volcano mining here.

I imagine a system that delivers them a coin per kw-hr consumed, let’s say. The value of that coin would be universal, in that it could only be spent on the game or on merch, but it should be a stablecoin pegged to a fraction of a dollar. The value would need to be like a a penny or two in their account, and Microsoft would also need a cut, and so would whatever entity we create to deal with this shit… we need a cut too, so that we can continue building and updating. But that’s all pennies. How many pennies?

So, if they mined for 12 hrs a day, at 250W, they would earn 3 of these coins, at a significantly higher cost to their parents. So, a nickel or a dime a day, in the user’s till. At the end of the month, they have a few bucks. At the end of the year, they have enough to buy an Ergo logo codpiece from our merch store. Who wouldn’t want that?

More seriously, we should offer the gamers the opportunity to trade their energy/game coins for ERG, if they want, or use ERG to buy more coins. Meanwhile it should also be possible to simply pay Microsoft directly for the game currency, using dollars or whatever other currencies they support, at an exchange rate that matches the actual cost of the energy that is needed to pay for creation of these coins, which is likely to be 3-9 times larger than the cost of production, since we are explicitly externalizing the energy cost and letting the gamer’s dad pay for it.

But hang on… his dad is already paying for all this and there could be exciting PvP play, casino action, sports betting, competitive gaming, microfinance, and all sorts of apps within this system, all at low stakes for entry level players. Is this bad? We can teach markets, trading, betting, and all sorts of stuff, curated by Microsoft and using their fiat onramps… why not? But it still needs a proper accounting for the money.

So how much ERG do we mine with 250W on a single X-box? At the moment, probably just enough. But consider the block difficulty if this mining software was actually widespread and used by thousands or even millions… it is hard to model what would happen in such a system. Bear in mind that what I am describing would be funded by the unaware and deliver value to the participants in a variety of ways, which is the entire point of gaming, money, and infrastructure.

Let’s say it’s about 0.05 ERG a day, per machine as described above. That’s enough, at current status. Let’s say that the price of ERG climbs, along with the difficulty and adoption? Well then it would be considerably less ERG per day, but the similar payout in these game/energy coins.

I feel like I am out on a limb here, but I don’t hear any creaking…